The tragic demolition of an almost century old anchor of the neighborhood- The Baptist Church of the Redeemer at 1921 Cortelyou Road- commenced in a shocked neighborhood. 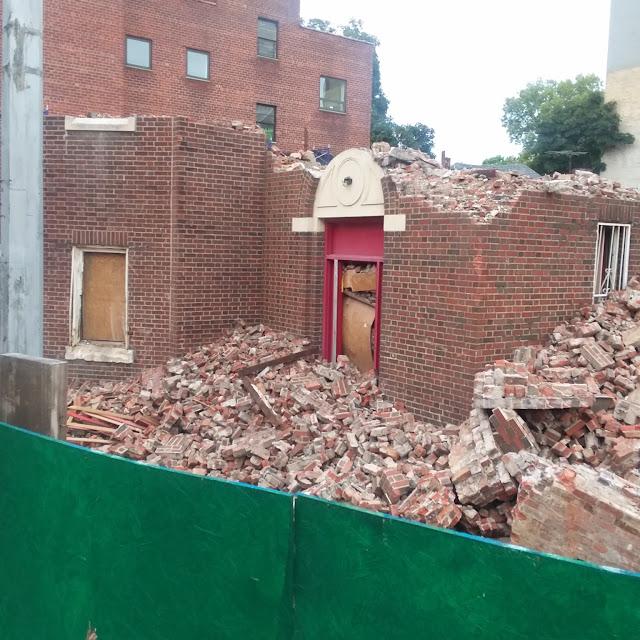 Respect Brooklyn and hundreds of residents had wanted Baptist Church of the Redeemer to be calendared by the LPC so that the Commissioners and the public would at least have an opportunity to testify in favor of landmarking this almost century year old church in the Flatbush neighborhood of Brooklyn with precious few individual landmarks.

As a matter of fact, the LPC admitted to an error about the history and design of the Baptist Church of the Redeemer. Their first hastily cobbled response attributed the design of the building only to Frank J. Helme, when historical records have continuously identify the architects as from the firm of Helme & Corbett. And LPC records note that Harvey Wiley Corbett was generally the principle designer of the famous firm's work. LPC acknowledged this error in the response to the Appeal.

It speaks to the hastyness of the LPC and that first response was not entirely accurate even as it consigned this century year old architectural gem to a fate as a pile of bricks.

In the latest response the LPC acknowledges widespread support for protecting potential landmarks and for expansion of Historic District protections and states that: ”The Commission is currently studying the Flatbush area…”. It remains to be seen if LPC is exploring sensible and much-needed preservation opportunities or towards senseless demolitions heedless of character and context and in favor of any height glass tower that erodes the unique sense of place many NYC neighborhoods still retain.

It is unclear if the new developer made any effort to extricate and preserve what was buried under the cornerstone by the congregation in 1919. Under the cornerstone was placed "the church calendar of June 12, 1919, was placed in the stone; the minutes of the first meeting of the Women's Missionary Society of June 12, 1912; a history of the Missionary Society of the Church; a nickel bearing the date 1919; the Roll of Honor containing twenty nine names of enlisted men, one making the supreme sacrifice, the pastor's son; a list of names of Sunday School scholars who contributed $5 each toward the cornerstone; a ten year history of the Church of the Redeemer; a copy of the Watchman-Examiner; a copy of the Brooklyn Eagle of June 29, 1919 and a copy of the Bible."

“I am disappointed that the new LPC chair seems to be following the same pro-development script at all costs that the previous Chair and Deputy Mayor Alicia Glen carry out on behalf of REBNY’s best friend, The Mayor.” said Linda Trujillo a local resident.

“Sensible development and potentially valuable programs should not require razing a 100 year old church in the neighborhood. It is disappointing that a creative and financially feasible adaptive re-use proposal was not pursued here.” Respect Brooklyn.

“I am extremely disappointed with the demolishing of this landmark. There seems to be no land, structure, tenant safe these days. This issue must cause the community to acknowledge the issues that they must rise up and stand for. I will continue my fight to preserve our community and to stand against those who choose money over the demands of our community.” - New York State Assembly Candidate Anthony Beckford

Slider of juxtaposition of before and after here